Nearly three-quarters (73 percent) of enrollments in America’s major public benefits programs are from working families. But many of them work in jobs that pay wages so low that their paychecks do not generate enough income to provide for life’s basic necessities. *Information based on latest public assistance study* 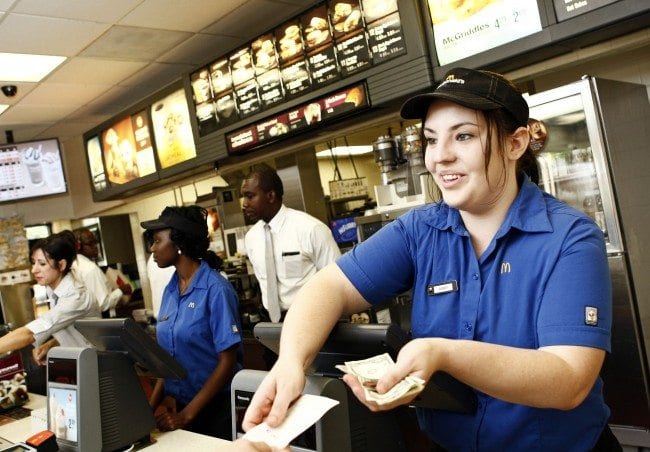 Low wages paid by employers in the fast-food industry create especially acute problems for the families of workers in this industry. Median pay for core front-line fast-food jobs is $8.69 an hour, with many jobs paying at or near the minimum wage. Benefits are also scarce for front-line fast-food workers; an estimated 87 percent do not receive health benefits through their employer. The combination of low wages and benefits, often coupled with part-time employment, means that many of the families of fast-food workers must rely on taxpayer-funded safety net programs to make ends meet.

This public assistance study estimates the public cost of low-wage jobs in the fast-food industry. Medicaid, the Earned Income Tax Credit and the other public benefits programs discussed in this report provide a vital support system for millions of Americans working in the United States’ service industries, including fast food. We analyze public program utilization by working families and estimate total average annual public benefit expenditures on the families of front-line fast-food workers for the years 2007–2011. For this analysis we focus on jobs held by core, front-line fast-food workers, defined as nonmanagerial workers who work at least 11 hours per week for 27 or more weeks per year.

Workers with Family Member Enrolled in One or More Public Programs by Industry: 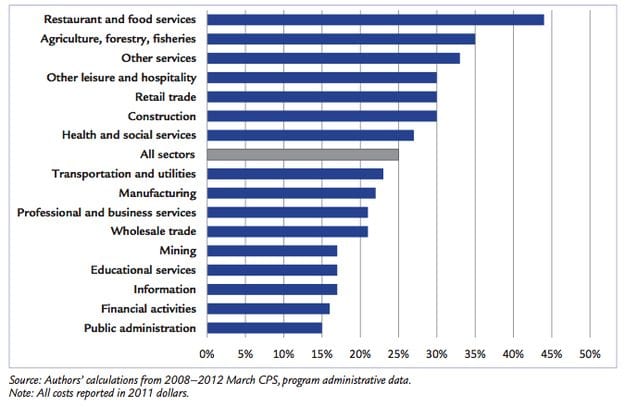 More than half (52 percent) of the families of front-line fast-food workers are enrolled in one or more public programs, compared to 25 percent of the workforce as a whole.

The cost of public assistance to families of workers in the fast-food industry is nearly $7 billion per year.

At an average of $3.9 billion per year, spending on Medicaid and the Children’s Health Insurance Program (CHIP) accounts for more than half of these costs.

People working in fast-food jobs are more likely to live in or near poverty. One in five families with a member holding a fast-food job has an income below the poverty line, and 43 percent have an income two times the federal poverty level or less.

Even full-time hours are not enough to compensate for low wages. The families of more than half of the fast-food workers employed 40 or more hours per week are enrolled in public assistance programs.

On 1st Street in Santa Ana — not far from where authorities recently cleared a tent encampment along the Santa Ana River near Angel Stadium — developer Caleb Roope wants to build nearly 1,000 apartments that will be affordable for low-income seniors and...
Read More

How A Home Warranty Will Save You Money

A Home Warranty Will Save You Money Owning a home can be expensive. Appliances break down, and air conditioners tend to quit working in the middle of the summer. In fact, most home have a major mechanical breakdown twice each year. Usually, these breakdowns occur at...
Read More

Healthcare reform tends to be tricky and complex as it attempts to find a common ground that is beneficial for all people. Burdened by the political firestorms that surround it, the new healthcare bill approved by the House of Representatives will...
Read More

Should You Consolidate Student Loans?

Should You Consolidate Student Loans? In order to make it through the years of school, students take on a lot of debt from various loans. Sometimes, these loans come from private lenders with higher interest rates and fewer protection. Most loans, however, are funded...
Read More

If you are in charge of creating the family budget, chances are, you’ve had the unfortunate experience of having a brilliant budget plan that isn’t executed well. This happens to many families and couples, and with a little attitude tweaking, you can solicit the help...
Read More

Run A Background Check When Applying for Jobs!

Social media is everywhere in the air around us today. Hence it is natural for you to assume you can handpick and choose what you want your employees to see. Most people therefore imagine that once they clean up their Facebook wall and delete those...
Read More

Finding Employment with Job Searches Sometimes, life hits Americans hard. With ups and downs in the economy, it may be difficult to maintain consistent employment over a long period of time. Fortunately, there are options to help find a new job or career. In the...
Read More

Life does not always work out as planned. Sometimes, a gap in employment leads to a few missed payments, and eviction, or a repossessed vehicle. These things happen to most people. In order build credit back up, a credit card may help. Making regular...
Read More 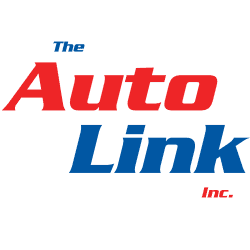